How to convert FLV to Xbox with Xilisoft Video Converter?

Now let's focus on how to step by step convert FLV to Xbox with the FLV to Xbox video converter.

Launch Xilisoft Video Converter, add your FLV file by clicking "Add" in the File menu or in the main interface.

2. Select the target to decode

By highlighting the FLV file, you can see its info including video codec and audio codec in the recording area.

After selecting certain output format, the right column will show its general standard. By clicking certain settings such as "Start Time", "Video Size", "Video/Audio Bit rate" and so on, you may set it.

Now let's select the output folder by clicking the "Browse..." button or directly enter a path in "Destination" drop down list box.

5. Start the FLV to Xbox conversion

Finally, click "Encode" in the File menu. After a successful conversion, the info "Completed" will show. 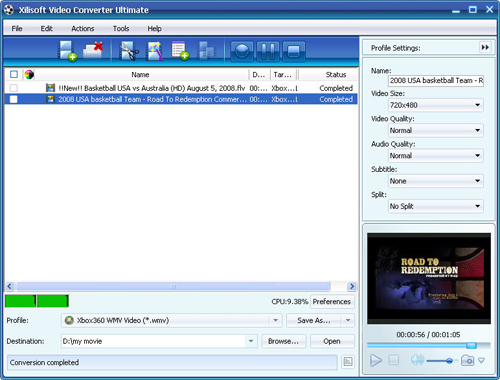